How Thames Water has adopted the WITS Protocol

The Water Industry Telemetry Standards DNP3 Protocol was implemented in 2010-2011 to help water companies achieve greater efficiencies by standardising and improving communications protocols.  We describe below how Thames Water has adopted the protocol and the resulting benefits delivered to our business.

The Water Industry Telemetry Standards (WITS) protocol is based upon the international standard DNP3 protocol which was developed to allow for flexible and secure communications between devices, particularly in telemetry applications. The WITS Protocol Standards Association has 88 members and encourages close co-operation between water companies and external suppliers in order to achieve standardised telemetry features for the water industry.

WITS will enable us to :-

Previously, water companies would (and some still do) select their telemetry suppliers from a constrained list of RTU suppliers compatible with their telemetry infrastructure and systems. These were generally built on proprietary protocols and would provide non-standard features and data sets. If new suppliers were selected it would mean that new protocol drivers would have to be added to their systems at significant cost and effort.

Before Thames Water chose to adopt the WITS protocol it was using 17 different telemetry units across its estate.  This incurred significant effort to manage the procurement, maintenance processes and configuration standards. The configurations were constrained by the proprietary protocols; therefore we struggled to achieve consistent data reporting for Thames Water.

Retrieving data from numerous RTU manufacturers via different protocols led to inconsistent data sets and alarm/event reporting.  Each RTU vendor provided similar features but presented the data differently meaning Thames Water was unable to attain the same information across the RTU estate. It was unable to draw comparisons between the same asset types being monitored by RTUs from multiple vendors (i.e. comparing performance of different pumping stations).

The WITS protocol enables the standardisation of industry features such as data logging and alarm/event reporting. These features are then configured through the use of the WITS configuration management features.  As Thames Water is utilising a common set of WITS features it is able to share the WITS configuration approach between each manufacturer, essentially meaning WITS enables RTUs to be configured in the same way which ensures the data collection is consistent across the estate.

As a result of these features asset centric data sets and alarm reporting can be developed via the WITS standard features; these can be applied to multiple RTUs from multiple vendors. This reduces the development and testing required when producing configuration for different asset types.

The WITS central configuration approach provides a flexible mechanism to facilitate changing asset operating and management requirements. As Thames Water moves forward as a business, how it manages its assets will change. The WITS central configuration and download features allows the data collection and alarm reporting of each RTU to be re-configured at any time to ensure Thames Water has the correct information whenever needed.

The adoption of the WITS protocol provides consistent data and alarm reporting features but it has also provided Thames Water’s SCADA system with improved security. The adoption of DNP secure authentication (SAv2) addresses spoofing, modification and replay security threats and ensures that only the correct RTUs in the estate are able to communicate with the SCADA master. 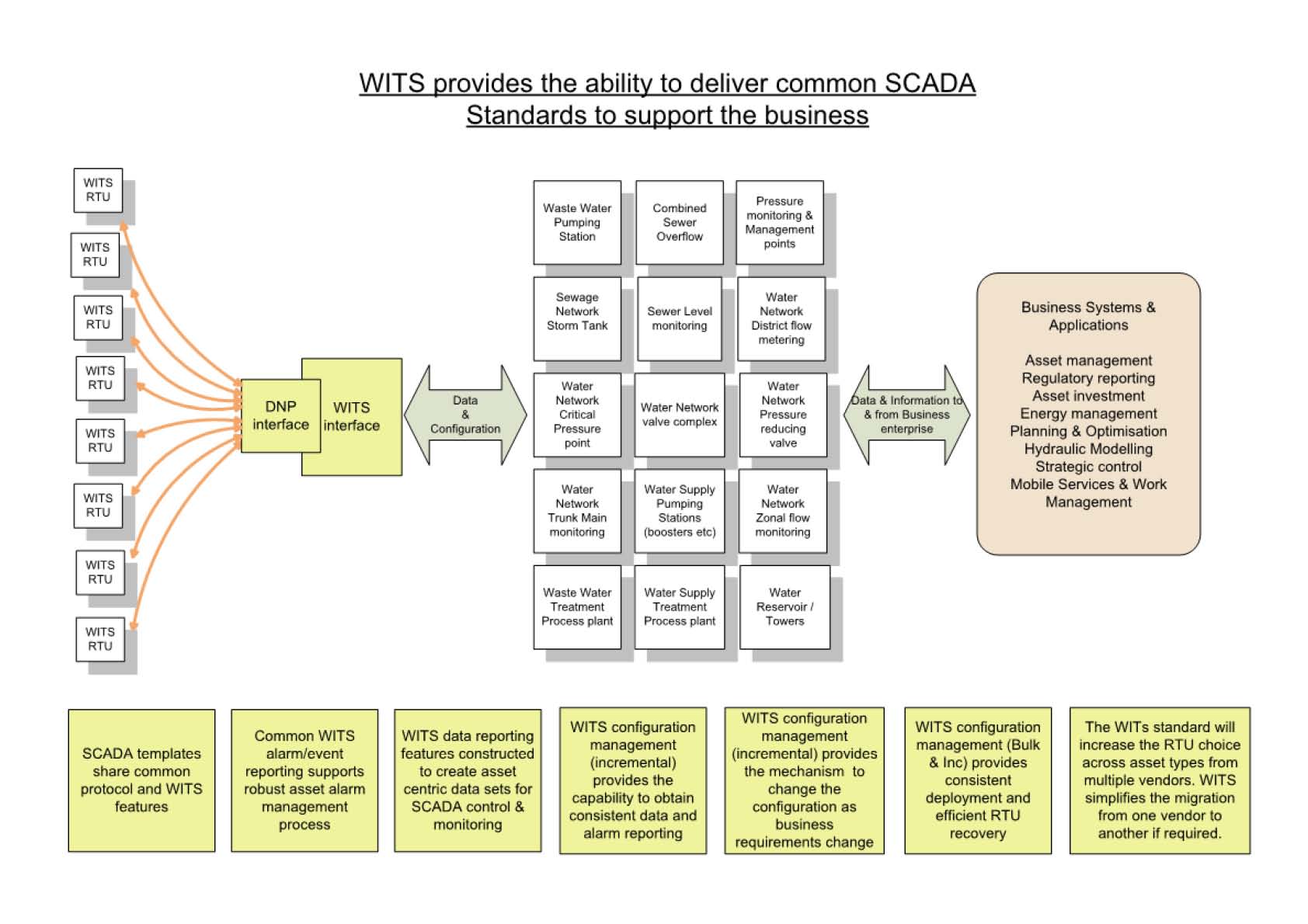 Once Thames Water made the strategic decision to adopt WITS, the first objective was to replace the legacy RTUs monitoring its sewage pumping stations. The goal was to run its pumping stations more efficiently and achieve optimal control rather than the traditional basic level control. The Multitrode, now Xylem, MultiSmart unit was selected as it provided a single box solution.  The MultiSmart and its DNP3 RTU background provided the enhanced pumping system control specifically developed for wastewater pumping stations allowing Thames Water to use the WITS features to maximise the benefits.

“The MultiSmart provides accurate on-site calculations and measurement of power consumption, pump energy consumption and flow rate to derive overall system efficiency”, says Damian Whelan, UK ICA Development Manager at Xylem. “By combining all of these into the MultiSmart Intelligent Pump Station Manager, Thames Water can quickly and easily see which areas of a station are performing well and which can be improved. By utilising the pump efficiency function, the more efficient pump can be used more frequently, therefore improving Thames Water’s overall efficiency”.

The MultiSmart is able to adapt to the WITS protocol and DNP3 because it has been built and tested on a solid foundation. In August 2007 Goanna Technologies of Perth, Western Australia, performed testing for Multitrode and the Water Corporation of Western Australia to determine if the MultiSmart device met the requirements of the native DNP3 specification for level 2 slave compliance. The device was found to be fully compliant with the specification. Users can therefore expect MultiSmart technology to successfully communicate with any native DNP3 level 2 compliant master station, which Thames Water is currently using. This also ensured a robust native DNP3 platform for further development of WITS-DNP3.”

Mr Whelan went on to say “Xylem is one of the founding members of the WITS protocol and a current PSA committee member. We continually strive to produce practical and easy to use monitoring and control systems and a number of Xylem’s ICA product portfolio is WITS verified which fits this specification”.

Since working with Xylem and the integration with the MultiSmart pump manager Thames Water has been able to understand the benefits of adopting the WITS standard protocol. The MultiSmart’s enhanced performance data enables Thames Water to monitor the performance of its assets more accurately and in more detail. This has allowed Thames Water to configure its assets, such as pumping stations, to perform in the most energy efficient manner possible.

Thames Water is currently working with six vendors to replace approximately 8,000 RTUs covering a range of asset types, all of which will support the WITS protocol. This will help to minimise the number of SCADA RTU interfaces, and eventually allow Thames Water to achieve its goal of all RTUs communicating via one interface standard.

For more information about Xylem’s MultiSmart contact Xylem on 0115 940 0111 or visit www.xylemwatersolutions.com/uk

Xylem (NYSE: XYL) is a leading global water technology provider, enabling customers to transport, treat, test and efficiently use water in public utility, residential and commercial building services, industrial and agricultural settings. The company does business in more than 150 countries through a number of market-leading product brands, and its people bring broad applications expertise with a strong focus on finding local solutions to the world’s most challenging water and wastewater problems. Xylem