There came a point in the development of the WITS-DNP3 protocol, many years ago, when we had to migrate from writing documents about the protocol and thinking about how it would work, to building and testing real devices. To do this we used plugfests. For WITS and many other organisations, a plugfest is a chance to bring various bits of equipment together and test that the interfaces between them all work as expected. In the early days of WITS, the plugfests were pivotal to converting the paper standard to a real and working protocol on multiple vendor’s devices.

However, following the release of WITS-DNP3 V1.1, plugfests stopped. The development of WITS-DNP3 did not! As you can see from the release log, we squeezed various extra bits of functionality into further versions of the protocol, eventually taking it to WITS-DNP3 V3.0. Discussions between users and vendors of the protocol in 2016 prompted us to review our approach to plugfests and at the WITS Expo in October 2016 we announced our intention to hold further plugfests so that testing of the more recent WITS-DNP3 protocol changes and later versions of device firmware could be performed.

True to form, we arranged a plugfest to take place on Wednesday May 17th 2017 and invited all our device vendors, some new device vendors, and users to attend that meeting. Andrew Welsh of Xylem Water Solutions UK kindly offered the facilities in Xylem’s Colwick offices in Nottingham and to feed the large number of engineers and users we had turn up!

Our day started at 8:00am when Master Station and Field Device vendors started arriving at Xylem’s offices and setting up their equipment. As you can see from the photo below, we had a large room with a huge island of tables in the middle. 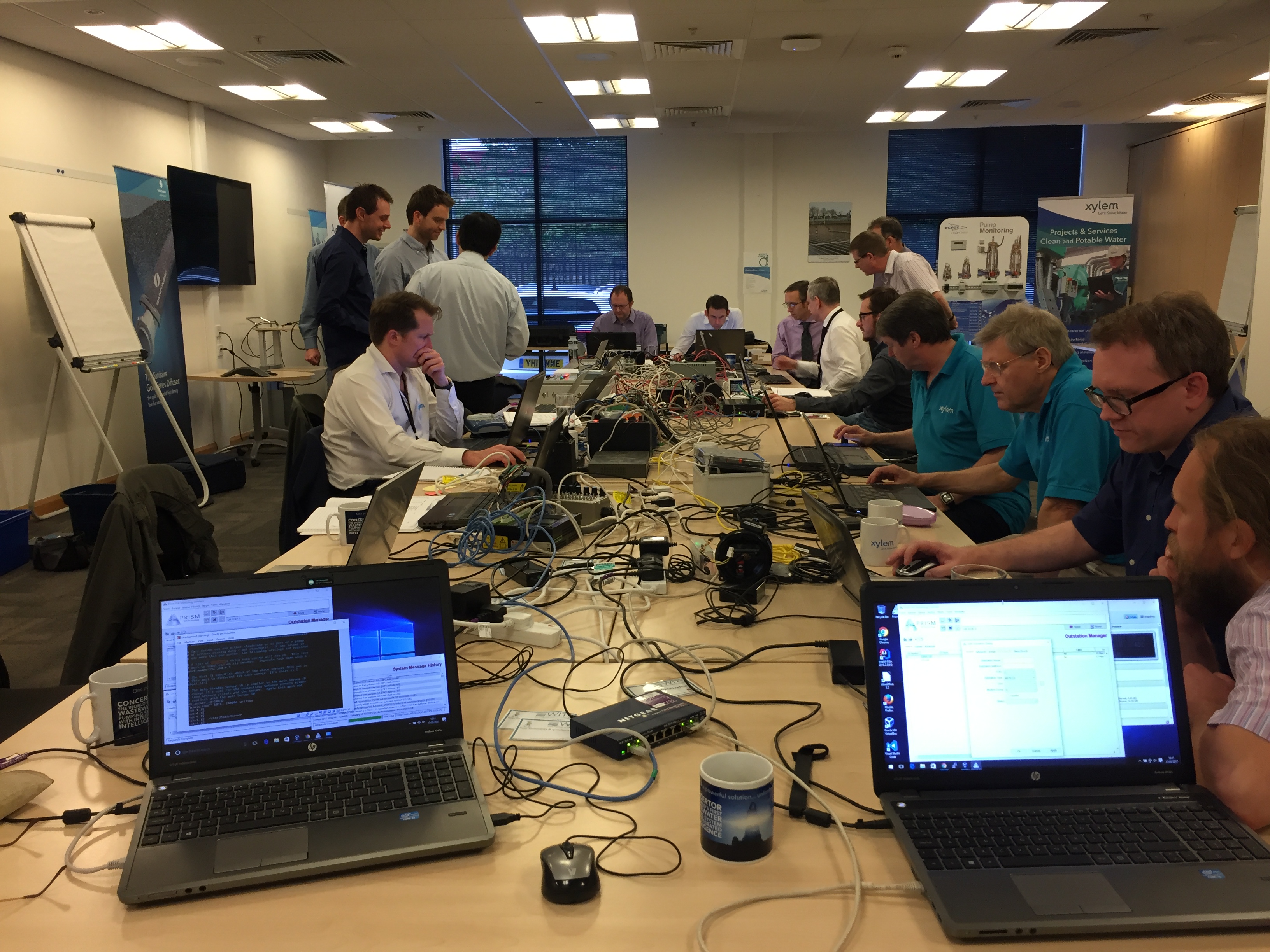 We ran a single internal IP network, to which all the equipment connected, and a good old fashioned white board on which we carved out static IP addresses so everyone could talk without problems. For our two mobile connected devices, the Cello from Technolog and the Point Orange from Metasphere, we used a fixed IP SIM in a mobile router connected onto the fixed IP network.

The new functions in WITS 1.2 and WITS 1.3, which you can also see listed in the release log on the main WITS website, were:

Not all vendors were able to run all tests and all versions of WITS; hence most vendors ran at their own pace going as fast or slow as necessary to prove their devices. Those who came prepared to test the later versions of WITS did seem to get onto those tests and move through them quite quickly.

We also had attendance from Codra and Capula who were investigating WITS and the possibilities that might exist. Users from AWS and NIW were there to help drive the Master Station interfaces, although they also found time to get a closer look at all the WITS devices present.

The WITS Chair, Simon Harrison was present, together with various consultants who attended to assist during the day and lend their knowledge to the process; they were Barry Shephard from Sweco, Mark Davison and Neil Tubman from Terzo Digital and John D Hall who, as an honorary member of the WITS PSA, was acting as an independent.

During the day, several interesting issues were raised. These issues resulted in nine new tickets in the WITS JIRA (WITS-45 to WITS-53). If necessary these new tickets will be discussed through the WITS bulletin board or in the tickets to bring them to resolution. Some of the new tickets may result in changes having to be made to the current application notes. Vendors also took some issues away for later inclusion in their software.

For many of the issues, good discussions and debugging sessions took place on the day between those present. Indeed, this was one of the advantages of the day, that personnel who have often been instrumental in setting up WITS and or developing their company’s WITS product were on hand to discuss the detail of a problem and offer advice. As well as the personnel, you also have the actual systems right next to each other, unlocked and with staff who can drive out the detail when debugging. This was found to lead to speedier resolution of issues than normally is the case.

All those I talked to during the day were enjoying the day and making good progress on getting their systems tested. After the day, we sent out a small mail survey to see what they had made of the Plugfest once they had collected their thoughts. The main points coming back from that survey were:

Some vendors also mentioned they liked the users being in attendance and would like to see more of that at future Plugfests.

Given the positive response from the day, it is highly likely that the WITS PSAC will try and organise another Plugfest within the next 12 months. Who knows, before we get there maybe we will see a WITS-IoT plugfest, allowing us to add the finishing touches to WITS-IoT.

If you have any questions about the Plugfest or would like to be involved in any future Plugfests we organise, then please contact the secretary through enquiries@witsprotocol.org.