After the success of the last WITS-DNP3 protocol plugfest in May 2017, a further plugfest was arranged for Wednesday January 17th 2018. Jerry Trowbridge of Northumbrian Water kindly booked the excellent Sjovoll Centre in Pity Me, close to Durham and the Northumbrian Water offices for both the plugfest and user meeting (which was held the day after). On the day, two large meeting rooms were joined together to provide a huge space in which all the WITS Vendors and users could meet and set up their equipment for the plugfest.

As requested by users at a previous user meeting and by vendors at the last plugfest, the plugfest and user meeting were arranged on consecutive days, allowing users to attend both meetings easily. Those users who could make it, turned up on Wednesday 17th January for the Plugfest and stayed on till the Thursday for the user meeting. Users attending the plugfest included Anglian Water, Northern Ireland Water, Northumbrian Water and United Utilities. In all, over 30 people (users and vendors) attended the plugfest day.

Having a plugfest every six months managed to place this plugfest in January and as is often the way in England, the weather managed to provide some challenges in getting to Durham. Severe snow and road conditions prevented the main Xylem contingent from making the Plugfest (travelling out of Scotland) and even though the night before saw a 4 inch snowfall in Durham, everyone else was eventually able to get to the venue.

Our day started at 8:00am when Master Station and Field Device vendors started arriving at the Sjovoll Centre and setting up their equipment. As you can see from the photo below, we had a large room with a huge island of tables in the middle.

Hard at work during the WITS Plugfest

As per the previous plugfest we ran a single internal IP network, to which all the equipment connected, and a good old fashioned white board on which we carved out static IP addresses so everyone could talk without problems. For our two mobile connected devices, the Cello from Technolog and the Point Orange from Metasphere, we used a fixed IP SIM in a mobile router connected onto the fixed IP network. This time we also had a telephone exchange available which allowed us to test PSTN from various Field Devices.

The testing performed on the day varied for each vendor but largely fell into one of the following categories:

The last category of testing above is one made particularly easy during the plugfest as all licensing restrictions for both Master Stations are removed during the day of the plugfest.

The following table lists the FD (Field Device) vendors who attended the day. As well as these FD vendors, both Master Station vendors also attended: Servelec Technologies with Scope (version 4.5, trunk revision 59564), capable of supporting up to WITS 1.2 and Schneider Electric with ClearSCADA 2017 6.78.6325, capable of supporting up to WITS 1.3.

The following picture shows the various devices present at the day and gives an idea of the rats nest of wires that tends to exist during the day, but amazingly rarely seems to feature as one of the problems. 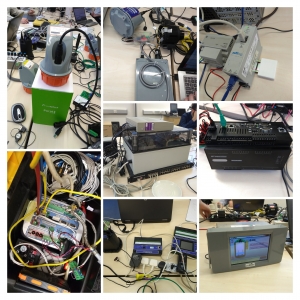 A selection of the Field Devices under test, can you recognise them?

The WITS Chair, Simon Harrison was present, together with various consultants who attended to assist during the day and lend their knowledge to the process; they were Mark Davison and Neil Tubman from Terzo Digital and John D Hall who, as an honorary member of the WITS PSA, was acting as an independent.

In the early afternoon, Steve Beadle of Schneider Electric presented a slide set about WITS-IoT, what it was and the progress that has been made by the WITS-IoT team in developing the new protocol. Steve also demonstrated what a WITS-IoT driver might look like in ClearSCADA using a prototype version he has been working on. Steve, Stuart Combellack and Mark Davison of the WITS-IoT core team were then on hand to answer questions about what WITS-IoT would mean for vendors and how they could start thinking about incorporating the protocol into their products.

During the day, several interesting issues were raised. However, unlike the last plugfest where these issues resulted in nine new tickets being raised in the WITS JIRA, no new issues were raised in JIRA this time. Most of the issues raised were specifically for the vendors and not for the WITS-DNP3 Protocol itself, those not fixed on the day were taken away to be fixed slow time and no doubt tested again at the next plugfest.

As for the last plugfest, one of the main advantages of the day is to have the actual staff involved in development of the WITS products from each vendor present in the same room at the same time. This means that failures in operation can be quickly found, analysed and sometimes even fixed in the same session. This is something that would be much slower and more difficult outside the plugfest environment.

After the day, we sent out a small mail survey to see what attendees had made of the Plugfest once they had collected their thoughts. The main points coming back from that survey were: