On Tuesday 9th October 2018 at the Green Park Conference centre in Reading, WITS held another WITS-DNP3 Protocol plugfest. The event was kindly hosted by Russ Wheadon of Thames Water. This plugfest built on the success of the January 2018 plugfest which was hosted by Jerry Trowbridge of Northumbrian Water; you can read more on that plugfest here. In a similar way to the January meeting, a WITS User Meeting was planned for Wednesday 10th October, the day after, allowing users to attend both meetings easily. User attendees at the plugfest included Anglian Water, Northern Ireland Water, Northumbrian Water, Severn Trent Water, Thames Water and United Utilities. In all, over 40 people (users and vendors) attended the plugfest day.

At eight o’clock on Tuesday morning, Master Station and Field Device vendors started arriving at the Green Park Conference Centre to set up their equipment. As you can see from the photo above, we had a large room with a circle of tables. Master Stations and Field Devices, along with their support equipment, were set up on those tables and connected together using an internal IP network. GPRS and 3G connectivity was provided by a cellular router connected to the same internal network and we also had PSTN equipment available. The day drew to a conclusion at around five o’clock.

Apart from vendors testing specific issues with the Master Stations and trying out newly implemented WITS features against the Master Stations, we also suggested that vendors try running a series of regression tests to see if this could be performed during the day and form part of the output of the plugfests.

One very promising addition to the normal plugfest regime was the inclusion of new vendors as invitees to the day. A couple of vendors who have recently joined WITS, Hydro International and Detectronics, both attended the day so that they could get a better idea of what was involved in the development of WITS Field Devices.

The following table lists the FD (Field Device) vendors who attended the day. As well as these FD vendors, both Master Station vendors also attended: Servelec Technologies with Scope (version 4.6, trunk revision 62232, expected to become the Quality Street release), capable of supporting up to WITS 1.2 and Schneider Electric with ClearSCADA 2017 r3 Beta 6.80.6834, capable of supporting up to WITS 3.0.

The following picture shows a collage of the various devices present on the day. 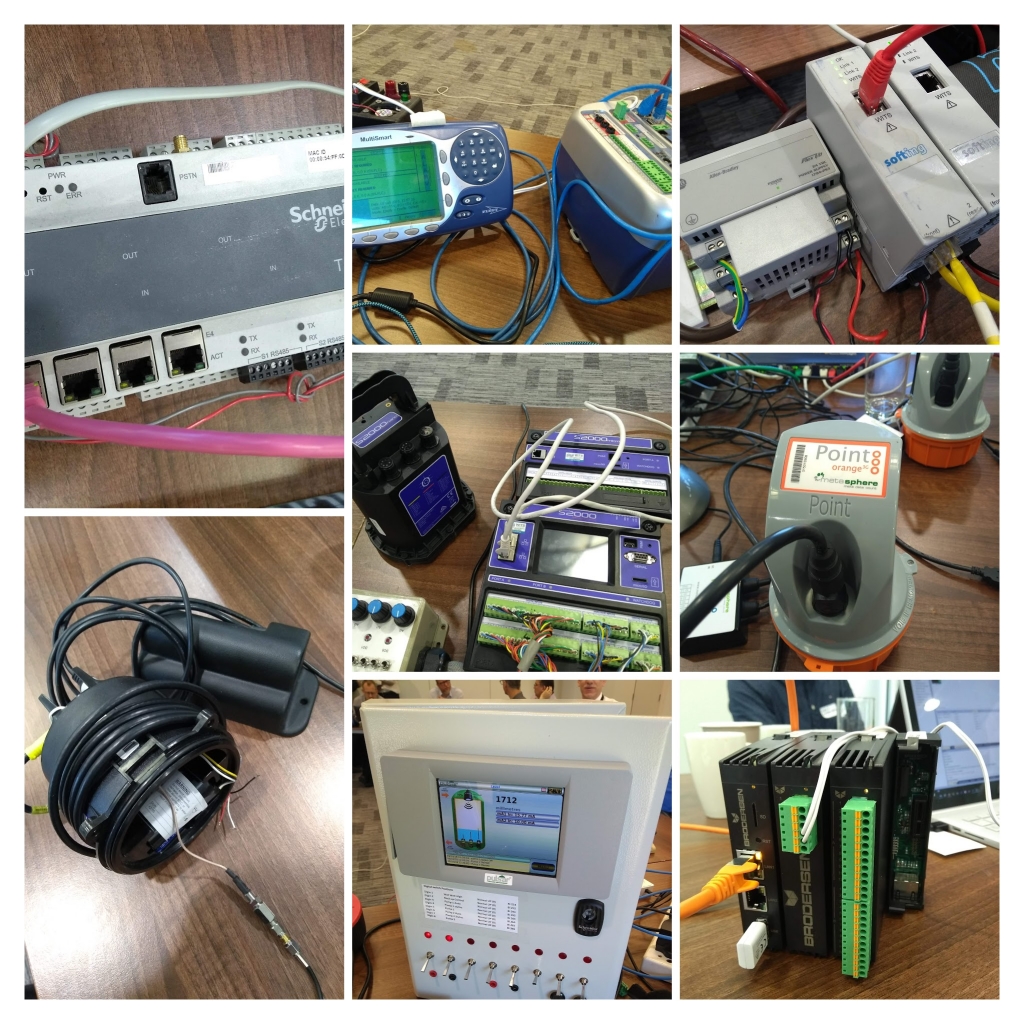 The use of WITS over satellite – It all works!

Wireless Innovation attended the plugfest in January and had a number of discussions with attendees around the use of WITS-DNP3 over satellite. They were sure that WITS-DNP3 could be made to work over satellite and offered to demonstrate it at this plugfest. With the kind assistance of Schneider Electric, Xylem and Thames Water, Wireless Innovation set up a demonstration for the plugfest.

The demonstration used a Xylem ATU900 connected to a Hughes satellite terminal communicating with an instance of ClearSCADA at the other end of a VPN. The satellite segment used the BGAN M2M service running over Inmarsat satellites. It permitted a 100 kBit/s throughput with a latency of around 2 or 3 seconds. The tests proved positive and surprisingly easy to set up, so the good news is that if you want to use WITS-DNP3 over satellite that should be possible.

Wireless Innovation were going to look at degrading the channel and testing how communications performed in this case. They then expect to write a case study which will include what they did, how they did it, advice on setting up satellite communications, Field Devices and Master Stations to work with WITS-DNP3 and hopefully some information on what happens as the signals deteriorate. We look forward to seeing that published on the WITS website in the future.

In the early afternoon, Steve Beadle of Schneider Electric gave a presentation on WITS-IoT, announcing the release of Version 1 of the protocol documents for WITS-IoT. WITS-IoT is a complementary protocol to WITS-DNP3 which uses a lot of the same ideas and nomenclature but is based on commonly available and mature IoT standards. WITS-PSA’s hope is that WITS-IoT will be widely adopted as an easy-to-implement protocol for use in the Industrial Internet of Things, providing all the benefits of WITS-DNP3 as originally envisaged by the users.

Having announced the release of the Version 1.0 documents, there was then a call to vendors of Master Stations and Field Devices to start implementing the protocol ready for next years first plugfest. It is expected that Schneider Electric, Servelec Technologies and Technolog will all have WITS-IoT Master Stations at next year’s plugfest, so now is a good time for Field Device vendors thinking of implementing WITS-IoT to read the documents and try implementing on their devices.

The generation of the protocol documents has been accompanied by the development of matching software to test what was being written in the documents. This collection of software and devices was demonstrated at the Plugfest to show that we do not have far to move to get fully working systems. You will be able to read much more about this announcement in another article on the WITS website and the full slide set, used for the presentation, will also be available in the Members’ Library on the WITS website. However to whet you appetite there is a collage of WITS-IoT pictures below showing what was there on the day.